By Ann Langis on 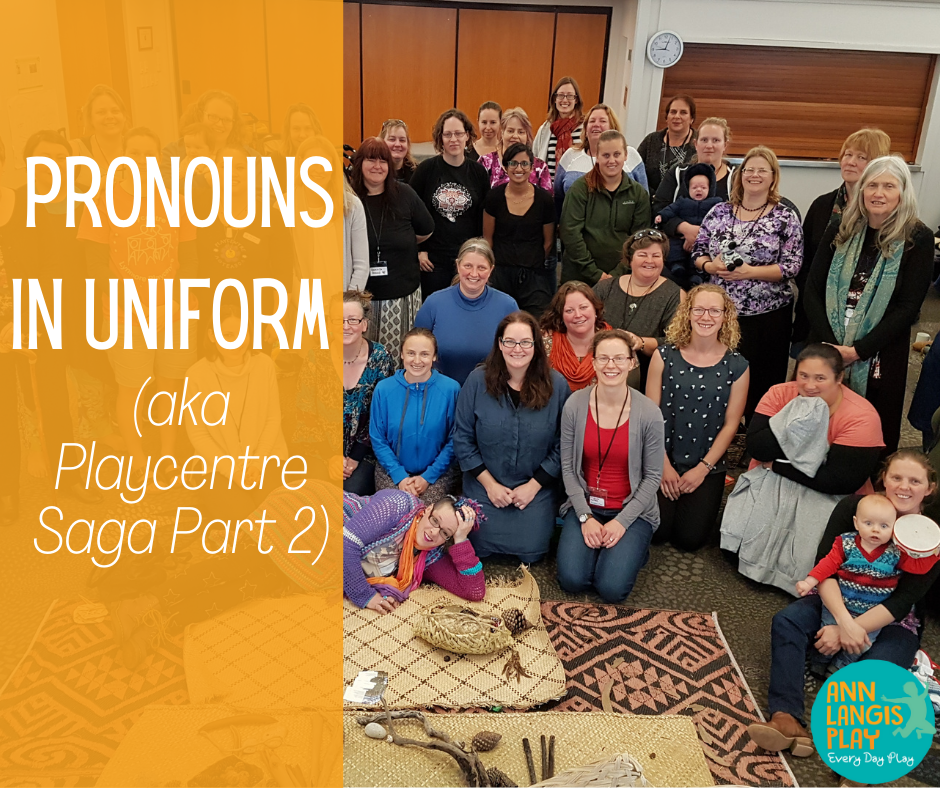 I’ve been asked this question many times since my previous post describing the events of the Playcentre Aotearoa Annual General Meeting in late July.  As is usually the case, there are no simple answers… but I can share my perspective based on observing and participating in national Playcentre governance over the past 6 years.  In fact, in attempting to understand the situation, I’ve gone right back to before my first child was born, even back before I had moved to NZ.

I had the experience of attending 3 different high schools during my teenage years, all fairly distinct.  The first, a crumbling low-decile multi-ethnic high school in Queens, New York City.  The second, a selective performing arts high school in Manhattan with hugely diverse student population, but all with the privilege of having an identified talent in the arts.  The third, a wealthy suburban high school near Washington DC, where students were generally the offspring of white collar government workers (meanwhile my Dad was a ‘mad scientist’ trying to sequence the human genome at various universities and institutes).

When I first moved to New Zealand, I broadened my experience in secondary environments while working as a special needs aide at Auckland Girls Grammar School.  These girls had a range of challenges such as Autism, ADHD, physical disabilities, and developmental delay.  As I gradually developed a relationship with them, we often would fill our ‘non-academic’ moments with chit chat where I would endeavor to learn more about them.

One of the first questions I asked was how they felt about their school uniform.  I was fully expecting them to reply with groans and complaints, but they all seemed quite positive.  “It makes it easy to get ready in the morning” and “I don’t have to compare my clothes against other girls” were responses I got.  I was fairly shocked, as my hunch had been that all teenagers must hate that sort of limitation on their freedom.

In the face of these surprising responses, I thought back to each high school I attended and re-examined my memories.  In Queens I arrived my first day of school sporting the Gap jean jacket that was so popular at my California Intermediate school, but finished the week dressed all in black and on a furious crash course in heavy metal appreciation (luckily I was accepted in this social group even after I committed the sin of naming “Every Rose Has it’s Thorn” by Poison as my favorite song… FYI there was not a ‘glam-rock’ sub group to join).   At the performing arts school I swapped my suede fringe for the safety pins and doc martens which were the expected attire of anarchist punks.   And finally, suburban Maryland supplied my first real experience of the typical American high school social groups you see so often in movies.  Here I avoided the jocks/cheerleaders and found my groove with the ‘deadheads’ wearing tie-die and playing hackey.

In hindsight, it became suddenly clear that while none of these schools required a uniform, we as students had made them mandatory.   Within the groups I never heard an articulated statement about what we were ‘supposed’ to wear, but oh boy you certainly knew about it if you got it wrong, with terrible humiliation awaiting any missteps!   Sometimes fashion fails even led to the worst possible outcome; exclusion from the group.   Even though these judgements within the group could be anxiety inducing, the benefits of being part of a group far exceeded the negatives… the feeling of safety with your peers was absolutely worth strict adherence to unspoken clothing rules.  We were in a sense voluntarily limiting our own freedom as a trade off for social protection.

Pulling together the ensemble

So what do uniforms have to do with the current issues at Playcentre?  I believe it comes down to survival instinct.  Anytime there is danger, whether teenage cruelty, socio-political changes, or a pandemic… humans respond by trying to identify the danger, and choosing the ‘team’ that will provide the best chance of protection.  For example, most of us have decided we’re on the ‘team of 5 million’ but some of us are preferring to hang with Billy T-K.

Playcentre as an organisation faces some weighty challenges: our core value of families being the first and best educators for their children stands in sharp contrast to the nationwide trend for children to spend their early years in childcare.  Who comes to Playcentre when both parents are at work?  Do single parents see Playcentre as a viable option?  Do young families even know we exist, and if so, does it sounds like way too much work on top of their already busy lives?  Perhaps Playcentre is no longer relevant, maybe it has run it’s course?  Within Playcentre there is a real fear of decay, and obsolescence.

And what do we do when we feel danger?  We choose a team.  And in doing so we often unwittingly choose an enemy.  It seems that in Playcentre we have chosen teams internally and are fighting the perceived enemies INSIDE the organisation, rather than pooling our collective capacity to fight for our values in the wider world.

When I stepped up to Association President at North Shore I began attending national meetings.  I was a bit concerned when Association employees and past members started saying things to me like “Are you SURE you want to get involved at the national level?” and “It’s really quite a mess… lots of drama and they don’t know what they are doing!”

In reality, it was awesome.  I met skilled, passionate Playcentre people from around the country, heard perspectives previously unknown, and saw our values in action as Mums breastfed babies during weighty discussions and teenage babysitters played with children in the hotel ‘creche’.  But it also WAS a mess.  Tāngata Tiriti house was going around in circles on the amalgamation decision and getting nowhere.  Reps from rural areas were in tears describing their centres closing, begging those of us in larger associations to open our eyes and see their truth.  Reps from those larger Associations were asking doubtfully “How is the Trustee Board going to oversee all of these centres?  Do they have the skills to deal with this massive risk?”  Meanwhile South Island Reps were fiercely asserting their right to maintain paid supervisors on session while North Island Reps feared participation in the education programme was at risk of being eroded.  The two house model was new and exciting, but there seemed to be some underlying tension between our two houses….  We tiptoed around the processes, not wanting to get anything wrong that would derail our fledgling partnership.   When a Te Whare Tikanga Māori Rep sitting in our house noted, “Oh you lot aren’t so bad” I realised we had a bit of a reputation, and it didn’t sound positive.

Upon joining the board this divisive mentality came into sharp focus, as it was immediately (within the initial 10 minutes of my first Board Meeting) clear that the Co-Presidents were unsuccessfully navigating a tense personal conflict related to contentious Trustee nomination processes in Tāngata Tiriti house, fuelled by years of past mamae (hurt) between Association and National level.  There was a wide chasm of mistrust between the leaders of each house, which continued to grow over the coming months.  I felt the pressure to choose a side, either TWTM or TT… either Associations or National.

Both choices seemed supremely unhealthy for our organisation and so I remained in limbo for my 3 years on the board, without a ‘team’, looking for individual connections with board members and other Playcentre leaders that felt authentic and positive, and doing what I could to understand the situation and contribute something meaningful… before finally resigning in 2018, exhausted and disillusioned.

And here we are, in 2021, perhaps looking at a fresh opportunity to reframe the narrative, to move out of the US and THEM, to ground ourselves in ‘the Playcentre Way’ that empowers us to learn and grow together, as a collective group.  To seize the promise and potential of the amalgamation to speak a powerful voice nationally promoting strong families and communities.

We’ve taken an important first step at the rōpū called SGM last Saturday, where Playcentre/Rōpū Representatives from every region gathered to re-assert their voice in governance, but there is still much mahi to be done. It’s all too easy to fall into finger pointing and the blame game (and I’ve certainly been battling with it over these past 2 months), but it will only reinforce the US vs THEM mentality which has served us so poorly in the recent past.

So put on your Playcentre uniform of paint splattered T-shirts, rub some playdough in your hair, and let’s get busy getting our house(s) in order, together.  Trustees, Reps, Centres, Rōpū Māori, Alumni… The sooner we do that the sooner we can start shouting to the rooftops to keep this incredible institution going strong for our mokopuna and their mokopuna after that. 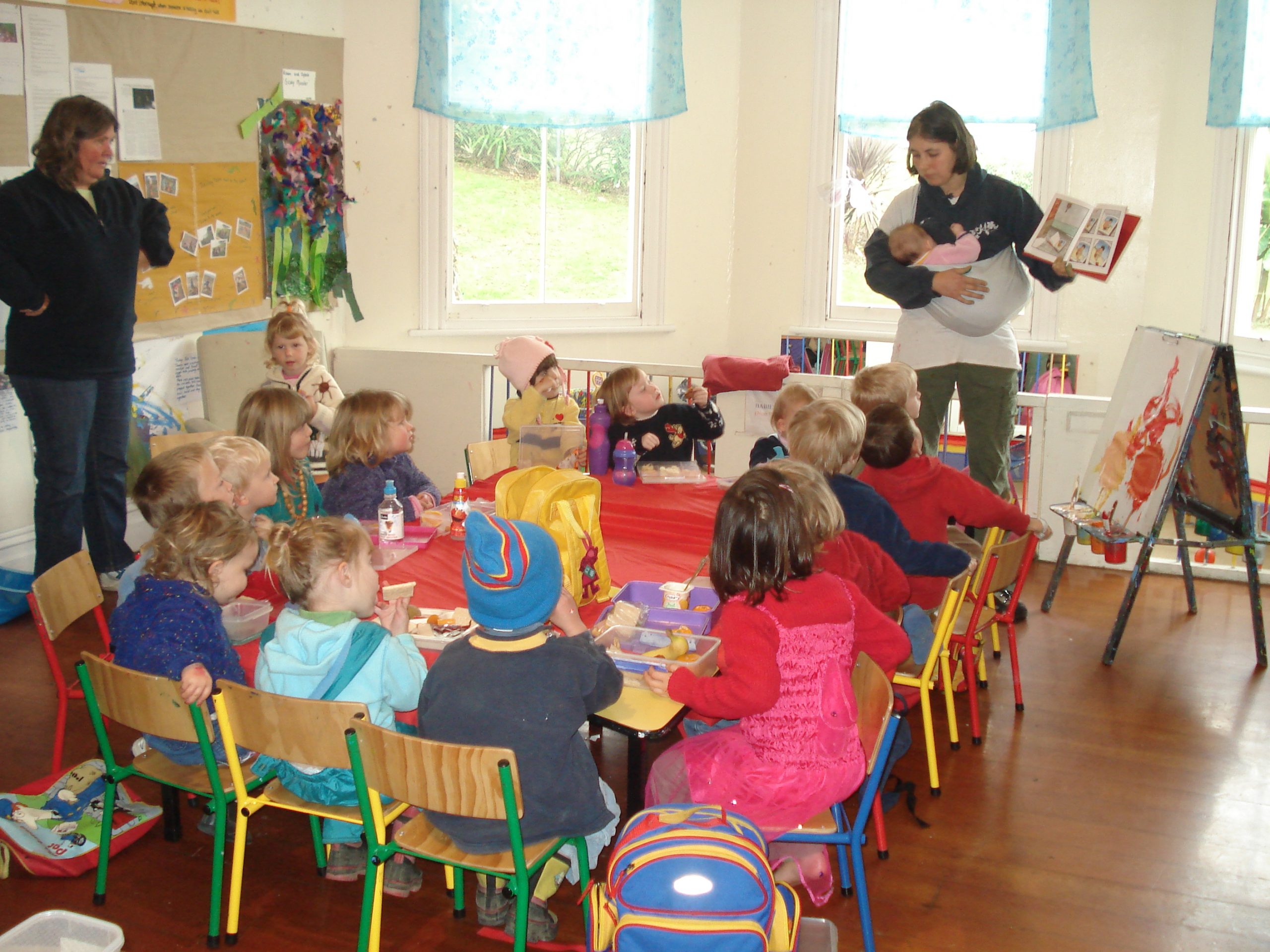 All I really need to know, I learned at Playcentre

By Ann Langis on